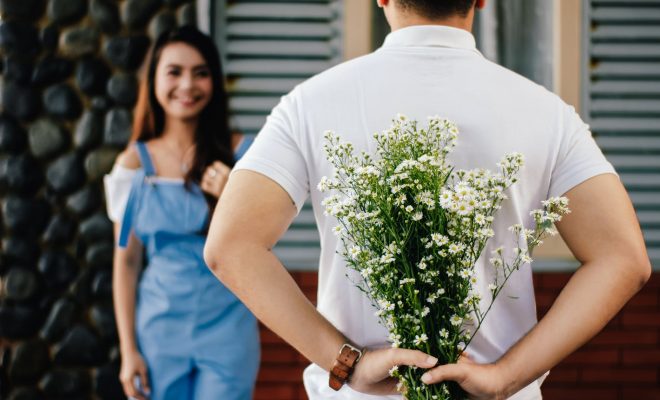 How To Get A Man To Commit Using Reverse Psychology

You’ve been in a relationship or an almost relationship for a certain period of time and it seems like time is standing still. You reached a certain level and he is very reluctant to get to the next one. He gives you just enough to hold on to and stay by his side but it’s never enough. He clearly has a fear of commitment.

Dating experts around the globe and me, as an individual who has been through one of these situations, can confirm that using reverse psychology on men is the only thing that makes them commit.

It took me a long while and a lot of heartache and pain to discover that I’d been doing it all wrong. I put my life on hold waiting for him to free himself of that fear of commitment. By waiting, I just managed to send him into the arms of somebody else.

I don’t blame her, or him for that matter. I just wasn’t up to the task. She knew the secrets of reverse psychology and how to make a man commit and I was clueless. I was one of those girls who thought that it just takes time, that what happens is beyond my control. I was so sure that was the right way to go but after all that has happened, I see I couldn’t have been more wrong.

To keep you from repeating my mistake, I will tell you where I went wrong and how I made it right the next time I got a chance.

1. Make sure you are choosing the right guy.
Couple holding hands smiling at each other

When I wanted commitment from the first guy I was with, I failed to realize that he was never the right guy for me—commitment or no commitment. So really think long and hard about what your man is bringing to the table and if he is really someone you want things to get serious with.

Look for someone who respects you, someone you can trust, someone who is there for you and someone who makes hours spent together seem like minutes. That’s really the short version but those are the basic things to build something real on.

2. Stop being too compliant.
I was settling for the little things he gave me. Especially time. He was giving me just enough time so I wouldn’t consider other options. He knew my limits well so he kept to those limits, never crossing them. I was too mild, too agreeable and too scared to lose him.

I should’ve never been scared of losing somebody who wasn’t afraid of losing me. When you show no fear, that’s when things start going your way.

3. Make sure the investments are equal.
Investing in a relationship shouldn’t be one-sided, it should go both ways. I gave myself to him heart and soul and I was always the one giving a bit too much. That is the biggest problem most of us make. We give too much of everything and don’t get anything in return.

The thing with applying reverse psychology is that you have to be stronger than yourself. You have to mirror his investment. If you have given more from yourself one too many times then it’s time for him to start returning what he has taken for granted.

4. Don’t be too available.
I always made time for him, no matter what I was up to at that moment. I wanted him to know that he was the most important person in my life but I was doing it the wrong way. It sends the message that you don’t have a life other than him. And believe me, that’s the worst message you want to send.

5.Time to start working on yourself for yourself.
Woman sitting at a viewpoint leaning her head backwards

I neglected my own personal interests because of him and the worst part is that he didn’t even have to ask me; it was all my own doing. By doing this, I killed the magic we had from the beginning. I was once again sending the message that I had no life besides him.

That’s really sad even now when I think of it. So I got smarter afterwards. I realized that the way to the heart of the man I am with is making my heart full. I have hobbies. Volunteer jobs. A fitness routine. I am even doing better at my job. I am proud of myself and the man who is dating me now is proud of me too. Proud and amazed at everything I have to show for myself.

6. Get rid of your worries.
If you are concentrating on the next step and constantly worrying about what will happen next, you miss out on your relationship. You miss out because you can’t get away from your own head. If you keep bringing up the question of commitment all the time, it won’t make him commit any sooner; it will make him run in the opposite direction.

This is where the reverse psychology kicks in. The best thing to do is to give him space and enjoy the good times that you are having with him. Don’t hold on to the commitment issue so tightly because what you get will be completely opposite, and that’s not something you want to achieve. Reverse psychology works if you show him you are not rushing things and talk very casually about it or not at all and he will be ready to commit all by himself.

To summarize, the best way to make him commit is to be independent. Do things for yourself. Give him space and time to miss you. Sure, you are going to let him know that you like spending time with him but don’t make him into someone you have to be compliant with. Don’t sit around and wait for him to make plans with you. Make your own plans and fit him into your schedule from time to time.

Your wishes, dreams, and desires are important too. By working on yourself and having your own life besides your relationship, you will make him want to be a part of that life. Commitment won’t scare him when he sees that he is there willingly. If you force it on him he will run because there is no man on this planet who likes to be pushed.

When you use reverse psychology to help you with love or in any other life situation, you are basically doing the opposite to achieve what you want. So, by taking a step back and giving him space, you are actually making progress and making him commit more easily.